The opening of Lynbrook Elementary School on February 10, 1957 was similar to that of many schools in Fairfax County. The day began at Garfield Elementary School, where the students packed up their books and materials in preparation for the move to Lynbrook. School buses were brought in to transport the children from Garfield to Lynbrook. Within a few hours, all twelve classes were settled and at work in their new classrooms. The next day, the four classes from North Springfield arrived. The cafeteria opened to students on February 12, and Lynbrook’s Parent Teacher Association (PTA) worked during and after school to set up the library. Dennis Lucas was one of the approximately 500 children who packed up their books and pencils at about noon on February 10, and moved to Lynbrook. During our school's 25th anniversary celebration in 1982, he described watching the construction of Lynbrook from his home on Channing Road. “It was kind of exciting to get a place you know was your own. Someplace you weren’t just borrowing," he said. 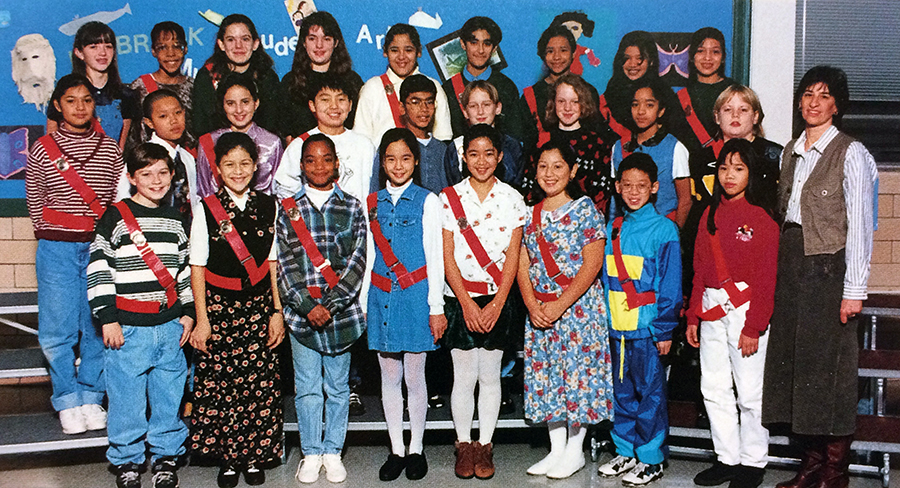 A Decade of Change

The decade of the 1960s brought several major changes to Lynbrook Elementary School, among which were the first additions to our building, the departure of seventh graders, the arrival of kindergarteners, and the racial integration of our student body.

In September 1960, FCPS officials began discussing the need for a four-classroom addition to Lynbrook with a capacity for 120 students. The contract for the construction of this addition was awarded to the E. E. Lyons Construction Company in January 1961, and was completed within the year at a cost of $54,500. 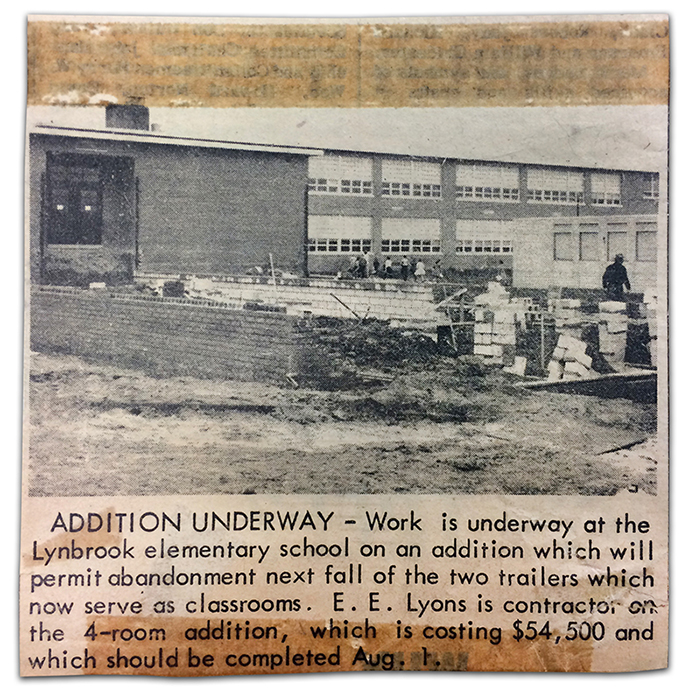 Also in September 1960, Fairfax County Public Schools (FCPS) opened its first intermediate schools. Prior to this time, elementary schools in Fairfax County educated children in grades one through seven.

When Lynbrook opened, public schools in Virginia were segregated by race. In the early 1960s, FCPS began a slow process of desegregation.

School segregation and residential segregation were deeply intertwined in Virginia. Since at least the early 20th century, legal land documents for Springfield area properties had language in them which was designed to permanently restrict the sale of the land to Caucasians only. In 1968, the Fair Housing Law was passed, eliminating racial barriers to homeownership. Lynbrook's student body remained largely Caucasian until the 1980s, by which time the effects of the passage of the Fair Housing Law began to be evident in Fairfax County’s suburbs.

In the fall of 1967, FCPS officials began planning a second addition to Lynbrook Elementary School, to increase the building's capacity to 780 pupils. On March 28, 1968, the Fairfax County School Board authorized the project, and the following October the School Board awarded the construction contract for the addition to E. H. Glover, Inc., in the amount of $441,420. The project would take nearly two years to complete. During the 1967-68 school year, a kindergarten program was piloted in several schools and proved so successful that one year later FCPS implemented kindergarten county-wide. Lynbrook opened its doors to the five-year-olds of the neighborhood in September 1968. FCPS enrolled approximately 8,000 children in kindergarten during that first year.

When Lynbrook first opened, our school only had 16 classrooms. Originally, the two-story wing of our building facing Backlick Road had seven classrooms on the first floor, and seven classrooms on the second floor. The library and an activity room were also located on the second floor. Today, the hallway directly in front of you as you enter through the main entrance was originally much shorter, and only had one classroom on each side. In 1961, this hallway was extended, adding four classrooms to the rear of the building.

During the 1968-70 addition, the pod was added on the north side of our building, and the gymnasium, a science room, and a music room were added to the rear of the building. Classroom arrangements were also reconfigured at this time, to provide space for kindergarten and special education instruction.

Another major plus of the 1968-70 addition was the installation of air conditioning throughout our school. In some old photographs, you'll notice the classroom windows are propped open. This was done to allow air to circulate throughout the building on warm days. If the temperature went above 95 degrees, school would be dismissed two hours early due to the heat.

During the 1960s, Lynbrook was a Summer School Center for remedial reading, math, and speech. St. Mark's Lutheran Church used our cafeteria on Sunday mornings for Sunday School classes, and American University, George Washington University,  and the University of Virginia often held classes in our school. A self-study report for school accreditation prepared by Lynbrook's principal and teachers in 1967, describes how our school had no school buses because the entire student body lived within walking distance. The study also reported that 35 percent of Lynbrook students had fathers who were in the military. Another 23 percent of students had fathers who worked for the federal government, and 89 percent of students came from households with "stay-at-home" mothers. 4 percent of students reported their mothers had professional careers as teachers or nurses, and 6 percent indicated their mothers worked as secretaries. Because many of the families were connected with the military, roughly a third of Lynbrook's student body moved out of the school district each year.

The Ida B. Auerbach Library

In 1972, Principal Ida Auerbach announced her retirement from Fairfax County Public Schools. Following her retirement, the Fairfax County School Board, at the request of Lynbrook's PTA, formally dedicated our library to Mrs. Auerbach in recognition of her loyalty, devotion, and service to our school and community. Principal Auerbach was succeeded by Alice E. Pharr, who led Lynbrook for five years from 1972 to 1977. During this time period, enrollment at Lynbrook swelled from 686 students in 1971 to a peak of 807 students in 1975. After 1975, enrollment at Lynbrook gradually declined to a low of 594 students in 1983. Declining enrollment during this era was not unique to Lynbrook. We'll explore why in the next chapter.

Lynbrook's School History was written with assistance from Robyn Carter.