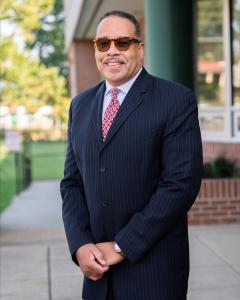 Mr. Jones joined the Lynbrook administrative team in August 2020 as an Interim School Based Administrator. He is a new Lynbrook Leprechaun. Mr. Jones has served in various schools as an Interim Principal since 2017. He has been an educator for 36 years. He started his teaching career as a business teacher in King George County Public Schools in 1986. He started in FCPS in 1990 at W. T. Woodson High school and moved to Annandale High School and Bryant High School consecutively. He was then promoted to be an Assistant Principal in Bryant High School and became a Principal in the same school. Mr. Jones obtained both his undergraduate and Masters degree in Business Education from Virginia State University. He then obtained a Master of Arts in Educational Administration from Virginia Polytechnic Institute and State University.

Mr. Jones treasures working with kids to support them in being successful in school and their personal lives. He loves to sing! Mr. Jones wants Lynbook to know that he is a Spiritual, Authentic, Compassionate and Loyal Leader.